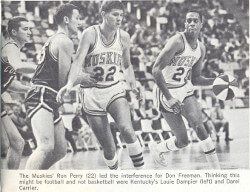 The ABA first located its league office in Minneapolis and the future looked bright for the Muskies, who shared the same offices as the league. Their first draft pick was talented center Mel Daniels, who would go on to become one of the ABA’s most celebrated players. Daniels was also a first-round draft pick of the NBA’s Cincinnati Royals, but he decided to cast his lot with the upstart league. The selection of Daniels paid off for the team as he led the league in field goal attempts, field goals made, offensive and defensive rebounds, and was named the league’s Rookie of the Year. Daniels, Donnie Freeman, and Les Hunter all represented the Muskies in the first ABA All-Star Game, and shooting guard Ron Perry finished fifth in the league in three-point field goals made and attempted and fourth in three-point field goal percentage. The head coach was Jim Pollard, a former teammate of ABA Commissioner George Mikan from their days with the NBA’s Minneapolis Lakers. The Muskies would win 50 games in their lone season.