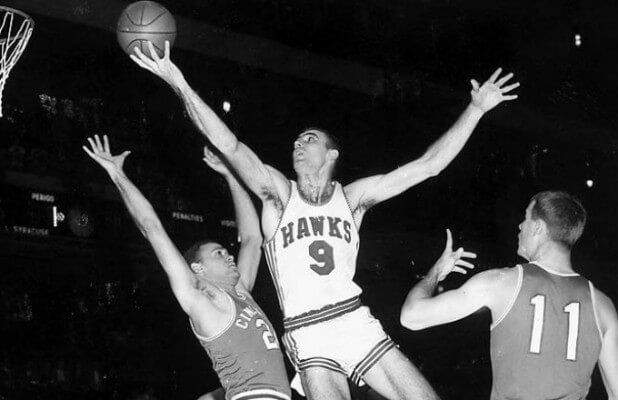 Coming off their trip to the NBA Finals the Hawks were flying high taking the Western Division by eight games with a solid 41-31 record as they played a strong ball control game with Bob Pettit ranking third in scoring and second in rebounding. In the Western Finals the Hawks would have no problem with Detroit Pistons taking the series in five games, which included a dominant Game 4 performance in which the Hawks won by 44 points. Facing the Boston Celtics in the NBA Finals again, the Hawks once aging steal Game 1 in Boston and headed home with the series tied at a game apiece. Once again the Hawks took Game 3, as the Celtics lost Bill Russell to an ankle injury. Despite playing without Russell the Celtics evened the series in Game 4. Back in Boston in Game 5 the Hawks pulled out a two point victory to take control of the series. Needing a win at home for their first NBA Championship the Hawks beat the Celtics 110-109 as Bob Pettit scored 50 points playing against an injured Bill Russell as the Hawks won their first NBA Championship.