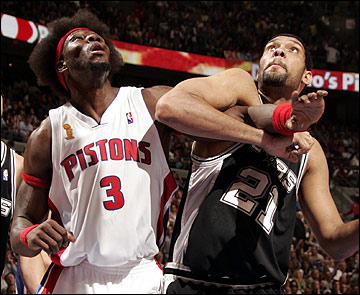 NBA Finals – 2005
The 2005 NBA Finals was the championship round of the 2004 – 2005 National Basketball Association season. The San Antonio Spurs of the Western Conference faced the Detroit Pistons of the Eastern Conference for the title, with the Spurs holding home-court advantage and the Pistons as defending champions. The series was played under a best-of-seven format. Unlike the previous three rounds, the team with home-court advantage hosted games one, two, six, and seven if all were necessary. It also marked the Pistons’ first NBA Finals loss to a team other than the Lakers since 1988.