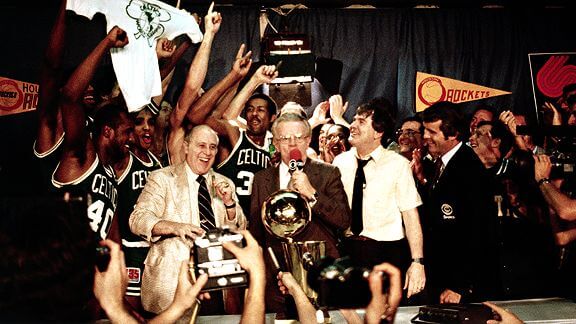 NBA Finals – 1968
The 1968 NBA World Championship Series pitted the Boston Celtics from the East, against the Los Angeles Lakers from the West, for the sixth time in ten years. The Celtics won their tenth NBA Championship in twelve seasons, by defeating the Lakers in six games. Significantly, Game 6 of the 1968 NBA Finals marked the first time that any NBA competition had taken place during the month of May.

NBA Finals – 1969
The 1969 NBA World Championship Series to determine the champion of the 1968 – 1969 NBA season was played between the Los Angeles Lakers and Boston Celtics, the Lakers being heavily favored due to the presence of three formidable stars: Elgin Baylor, Wilt Chamberlain, and Jerry West. In addition, Boston was an aging team; they made the playoffs as the 4th place team in the Eastern Division and were not favored to make it to the finals. The Celtics’ finals victory the last championship of the Bill Russell dynasty is considered one of the great upsets in NBA history.

NBA Finals – 1976
The 1976 NBA Playoffs was the postseason tournament of the National Basketball Association’s 1975 – 1976 season. The tournament concluded with the Eastern Conference champion Boston Celtics defeating the Western Conference champion Phoenix Suns 4 games to 2 in the NBA Finals. The series was highlighted by Game 5, a 3-OT victory by Boston. The Celtics won their 13th NBA title, second in the Dave Cowens era. Jo Jo White was named NBA Finals MVP.