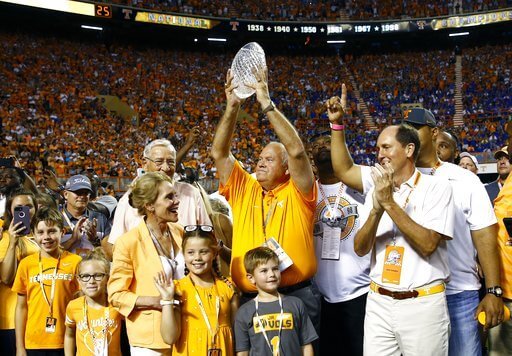 The 1998 Tennessee Volunteers football team represented the University of Tennessee in the 1998 NCAA Division I-A football season. Tennessee entered the 1998 season coming off an 11–2 record (7–1 SEC) in 1997. The Volunteers were given a preseason ranking of No. 10 in the AP Poll.

Tennessee was expected to have a slight fall-off after their conference championship the previous season. They had lost quarterback Peyton Manning, wide receiver Marcus Nash and linebacker Leonard Little to the NFL. Manning was the first pick overall in the 1998 NFL Draft, selected before Ryan Leaf. Tennessee was also coming off a difficult 42–17 loss to Nebraska in the Orange Bowl and was in the midst of a five-game losing streak to the rival Florida Gators. Nonetheless, the Volunteers ended their season in Tempe, undefeated, becoming only the fourth school in modern college football history to complete a 13–0 season.