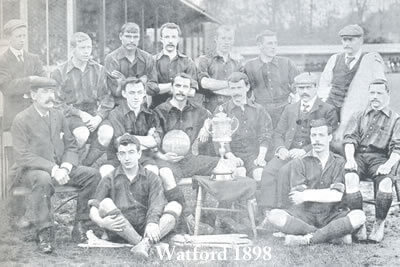 This was reported by the Watford Observer of 7 May 1898. It was agreed that the two clubs should complete their remaining fixtures for the season. The new club was named Watford Football Club.

Long-serving Skilly Williams was Watford’s first-choice goalkeeper between 1914 and 1926.

Following relegation to the Southern League Second Division in 1903, Watford appointed its first manager – former England international and First Division top scorer John Goodall. He led Watford to a promotion, and kept the team in the division until his departure in 1910. Despite financial constraints, Watford won the Southern League title in the 1914 – 1915 season under his successor, Harry Kent. Watford held the title for five years following the suspension of the Southern League during the First World War – after finishing the 1919 – 2020 season runners-up on goal average, the club resigned from the Southern League to join the new Football League Third Division.