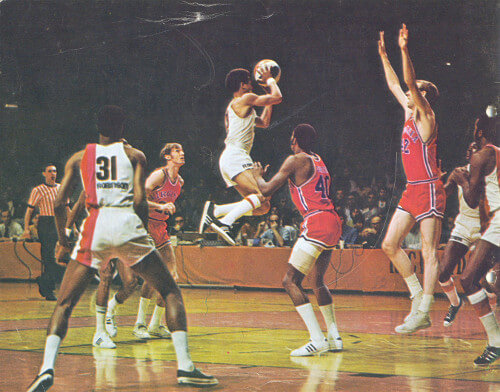 Following the 1969 – 1970 season, new owner Ned Doyle dropped “Miami” from the team’s name and made it a “regional” franchise, scheduling games in Miami (back at the Miami Beach Convention Center), Tampa-St. Petersburg at the Curtis Hixon Hall and Bayfront Arena, Jacksonville at the Jacksonville Memorial Coliseum, and in West Palm Beach at the West Palm Beach Auditorium. In an unprecedented move, Doyle “fired” the entire team (all players were traded or released) and kept the coach. The team replaced Blitman after an 18-30 start with Bob Bass. Bass was able to turn the team around and the Floridians finished fourth in the Eastern Division with a record of 37-47. The Floridians made the playoffs, but lost their series to the Kentucky Colonels 4-2.