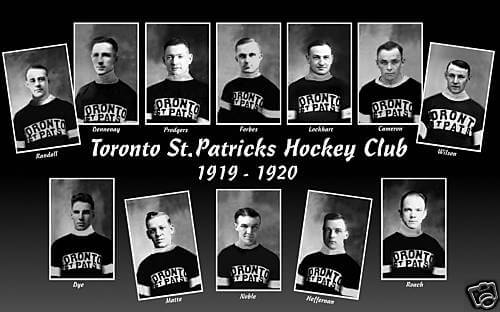 In 1919, Livingstone won a $20,000 judgement against the Arena Company, which promptly declared bankruptcy to avoid paying. The Toronto NHL franchise was put up for sale and Querrie put together a group that mainly consisted of the people who had run the senior amateur St. Patricks team in the Ontario Hockey Association the previous year.

The new owners renamed the team the Toronto St. Patricks (or St. Pats for short). Among the officers of the St. Patrick’s Professional Hockey Club Ltd. at the start of the 1919 – 1920 season were president Fred Hambly, vice-president Paul Ciceri, secretary-treasurer Harvey Sproule, Charlie Querrie, and player-coach Frank Heffernan. The jersey color was changed from blue to green.

The 1921 – 1922 NHL season led to the St. Pat’s only Stanley Cup win. The team finished second to the Ottawa Senators, but caught fire in the playoffs. The St. Pats defeated the Senators in a two-game total goals series 5–4. The team then traveled to Vancouver to take on the Millionaires, winning the series 3–2 and the Cup. The team was led by Babe Dye who scored 11 goals in the 7 playoff games, and John Ross Roach who had two shutouts.