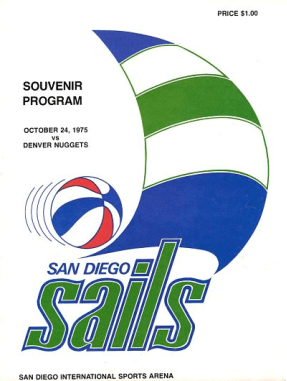 Bloom sold the franchise during the summer of 1975 to Frank Goldberg, a former co-owner of the successful Denver Nuggets franchise. Goldberg started anew, renaming the team the San Diego Sails for 1975 – 1976. Goldberg hired former University of Minnesota coach Bill Musselman and, with a completely different roster, color scheme, set of uniforms, and just about everything else, sought to repeat Denver’s turnaround a season earlier from mediocrity to championship contender.

But the Sails attracted only 3,060 fans to their home opener on October 24, 1975 – a loss to the Nuggets – and fan attendance rapidly dwindled further as the team limped to a 3-8 start. (A “crowd” of 1,670 showed up for San Diego’s third and last home game, against the San Antonio Spurs.) Goldberg soon learned San Diego was to be shut out of the pending ABA-NBA merger. Reportedly, the Sails were shut out at the insistence of Lakers owner Jack Kent Cooke, who refused to share his Southern California fan base with a team to the south.

With the team lacking fan support or a long-term future, Goldberg folded the franchise on November 12.