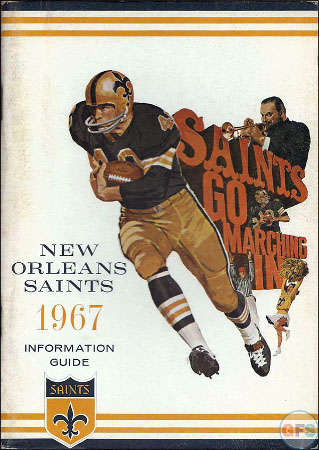 First, the brainchild of local sports entrepreneur Dave Dixon, who also founded the Louisiana Superdome and the USFL, the Saints were actually secretly born in a backroom deal brought about by Congressman Hale Boggs, Senator Russell Long, and NFL Commissioner Pete Rozelle. The NFL needed congressional approval of the proposed AFL-NFL merger. Dixon and a local civic group had been seeking an NFL franchise for over 5 years and had hosted record crowds for NFL exhibition games. To seal the merger, Rozelle arrived in New Orleans within a week and announced on November 1, 1966, that the NFL officially had awarded the city of New Orleans an NFL franchise. The team was named for the great jazz song most identified with New Orleans “When the Saints Go Marching In”, and it was no coincidence that the franchise’s official birth was announced on November 1, which is the Catholic All Saints’ Day.