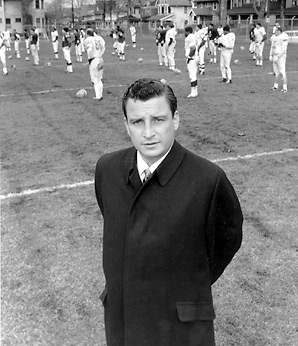 Art Modell, a 35-year-old advertising executive from Brooklyn, purchased the team in 1961 from a group of shareholders led by National Insurance Company. The beginnings of a power struggle between Paul Brown and Art Modell took its toll. Journalist D.L. Stewart recounted in Jeff Miller’s book on the AFL, Going Long, “As you well can imagine, Jimmy Brown and Paul were not thick. The buzz was that Jimmy had Modell working for him, and Paul took exception to that.” The season otherwise was typical: a fifth consecutive league-leading season from Jim Brown and a half-decent performance in the standings, but again, at 8–5–1, they were two games out of a berth in the championship.