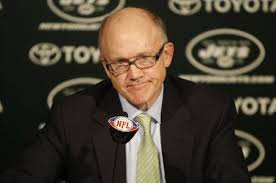 With the team for sale, two potential buyers were found in Cablevision and philanthropist Woody Johnson whose grandfather, Robert Wood Johnson II, expanded Johnson & Johnson. Johnson was unknown among the other NFL owners at the time of his $635 million purchase of the franchise. However, Johnson had a passion for sports according to former Knicks general manager Ernie Grunfeld and desired to own his own team. Johnson has been considered to be an enabler who wants the best from his employees.