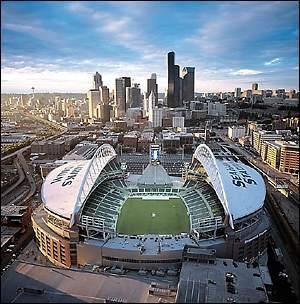 For the 2000 – 2001 seasons, the Seahawks moved to Husky Stadium while their new stadium was being built. Big changes were afoot in 2002. When the Seahawks left Husky Stadium at the end of the 2001 season they were part of the AFC West, but when they moved into Seahawks Stadium they were now part of the NFC West. It was originally called Seahawks Stadium but was renamed Qwest Field on June 23, 2004, when telecommunications carrier Qwest acquired the naming rights. CenturyLink Field has earned a reputation as one of the loudest stadiums in the NFL. It is in the Guinness World Record books for being the loudest stadium in the world. The seating decks and partial roof trap and amplify exceptional amounts of noise and bang it back onto the field. This noise contributes to increased false start penalties since opposing offenses can miss audibles and the snap count. From 2002 through 2012, there have been 143 false-start penalties on visiting teams in Seattle, second only to the Minnesota Vikings.