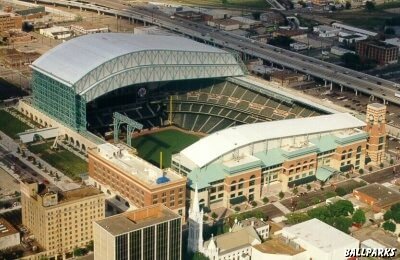 The 2000 season saw a move to a new stadium. Originally called Enron Field, the stadium was to feature a functional retractable roof, a particularly useful feature with unpredictable Houston weather. The ballpark also featured more intimate surroundings than the Astrodome. In 2002, naming rights were purchased by Houston-based Minute Maid, after Enron went bankrupt. The park was built on the grounds of the old Union Station. A locomotive moves across the outfield and whistles after home runs, paying homage to a Houston history that had eleven railroad company lines running through the city by 1860. The ballpark also contains quirks such as “Tal’s Hill”, which is a hill in deep center field on which a flagpole stands, all in fair territory. A similar feature was located in Crosley Field.