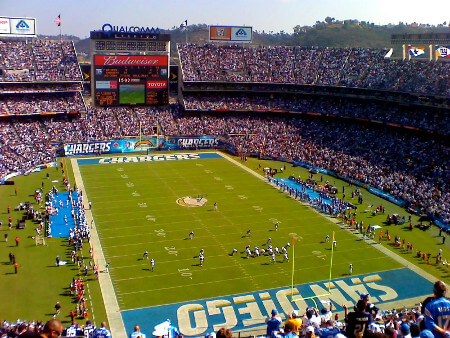 In the early 1960s, local sportswriter Jack Murphy, the brother of New York Mets broadcaster Bob Murphy, began to build up support for a multi-purpose stadium for San Diego. In November 1965, a $27 million bond was passed allowing construction to begin on a stadium, which was designed in the Brutalist style. Construction on the stadium began one month later. When completed, the facility was named San Diego Stadium.

The Chargers (then a member of the American Football League) played the first game ever at the stadium on August 20, 1967. San Diego Stadium had a capacity of around 50,000; the three-tier grandstand was in the shape of a horseshoe, with the east end low, consisting of only one tier, partially topped by a large scoreboard.