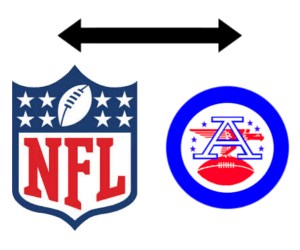 Contrary to common belief, it was not the AFL, but the NFL that initiated discussions for a merger between the two leagues, as it was fearful that Davis’ “take no prisoners” tactics would seriously reduce its talent base. Tex Schramm, the general manager of the NFL’s Dallas Cowboys since 1960, secretly contacted AFL owners, led by Lamar Hunt of Kansas City, and asked if they were interested in a merger. The talks were conducted without the knowledge of Davis, the new AFL commissioner. On the evening of June 8, 1966, the collaborators announced a merger agreement in New York.

Following their championship win, the NFL-AFL merger placed the Chiefs in the newly created AFC West division with the Chargers, Raiders, and Broncos.