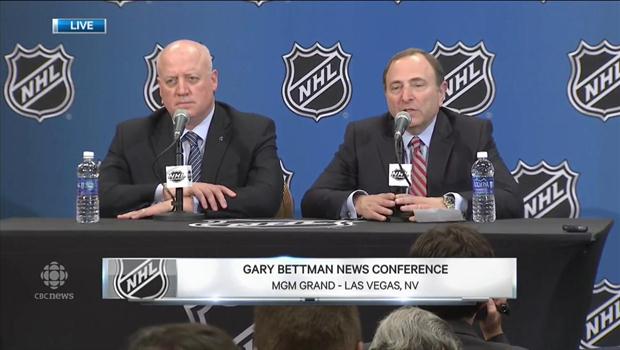 On June 24, 2015, the league officially opened up the window for prospective owners to bid on expansion teams. By this point, Foley had secured more than 13,200 season-ticket deposits for the arena. Bettman expressed the league’s intrigue of expanding into such a non-traditional market, especially in the wake of Foley’s ticket drive, but warned that the NHL wanted to “take a deep dive and look at what there is in terms of the interest that’s being expressed.” On July 21, 2015, the NHL confirmed it had received an application for an expansion team from Bill Foley for a Las Vegas team; it was one of two bids to have been submitted, the other being a bid from Quebecor to revive the Quebec Nordiques at a new arena in Quebec City. On August 5, 2015, the NHL announced it had invited both Las Vegas and Quebec to move into Phase II of the league expansion bid. The bid subsequently advanced to Phase III, which ended on September 4. On September 29, Bill Foley and Quebecor met the NHL’s executive committee in New York City to present their respective bids. Bettman also said that expansion requires a three-quarters affirmative vote from the Board of Governors, but the members of the executive committee would first have to make a recommendation to the group, and that no deadline had been set for a final decision.