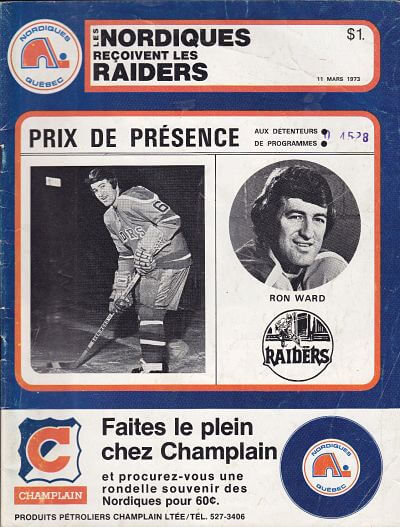 The Quebec Nordiques formed as one of the original World Hockey Association teams in 1972. The franchise was not one of the eight original teams established when the league was announced on November 1, 1971. The franchise was originally awarded to a group in San Francisco, as the San Francisco Sharks. However, the San Francisco group’s funding collapsed prior to the start of the first season, and the WHA, in haste, sold the organization to a group of six Quebec City-based businessmen who owned the highly profitable Quebec Remparts junior team; Marcel Bédard, Léo-Paul Beausoleil, Jean-Marc Bruneau, John Dacres, Marius Fortier, and Jean-Claude Mathieu.

They were named the Nordiques because they were one of the northernmost teams in professional sports in North America. Quebec City is located at 46 degrees north latitude; Nordiques translated from French to English means Northerners or Northmen. The only WHA teams located farther north were the Alberta Oilers (changed its name to Edmonton Oilers after one season), Calgary Cowboys, Vancouver Blazers and Winnipeg Jets.