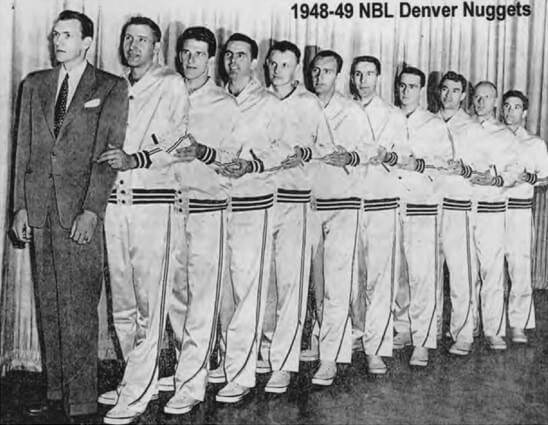 The Denver Nuggets trace their roots back to 1932 when the original amateur Nuggets were formed as a member of the Amateur Athletic Union. Led by player/coach “Jumping Jack” McCracken, the Nuggets were one of the most powerful amateur athletic basketball teams in the country, winning the 1939 AAU championship and losing the 1940 championship to the Phillips 66ers of Oklahoma. Not playing professionally, its players were given extra jobs by team sponsors, and they played on the stage of the Auditorium Arena (now Ellie Caulkins Opera House). Featuring stars such as McCracken, Robert “Ace” Gruenig and Vince Boryla, the Nuggets continued as an AAU power throughout their existence, and the AAU has been credited by historians for helping put Denver on the national sports map.
After the 1948-1949 season, however, the Nuggets decided to step out of their amateur status. Rather than join the NIBL who was founded in 1947 and remain amateur, the Nuggets’ General Manager, Hal Davis, secured a franchise in the nine-team National Basketball League to play in 1948-49 season. Thus, in 1948, the National Basketball League awarded Denver its first professional basketball franchise, which took on the people and identity of the Denver Nuggets.
That development occurred just one season after the NBL’s Minneapolis Lakers and their star attraction, George Mikan, defected for the rival Basketball Association of America. Davis wanted players to be paid openly for playing basketball, rather than be paid by a corporation for something else in an unregulated way. That 1948–49 team included Morris Udall, best known for serving in the US House of Representatives from 1961 to 1991.
In 1948-49, the Nuggets of the NBL would finish last in the Western Division (incidentally, Denver was the furthest “western” team in the Western Division) and in 1949 they merged with the BAA to form a new league to be named the National Basketball Association of America (NBA). Three players stayed on when the Nuggets became an NBA team.
When the NBL merged with the BAA (Basketball Association of America) in 1949 and became the National Basketball Association, the Nuggets became an NBA team. The westernmost team in the NBA, the Nuggets were led by player/coach Jimmy Darden, a star shooting guard who joined the amateur Nuggets after leaving the Army as a World War II veteran in 1946. The Nuggets played one season in the NBA, compiling an 11–51 record in the Western Division. The team was disbanded in 1950, leaving Colorado without any major league sports teams until the birth of the AFL’s Denver Broncos in 1960.