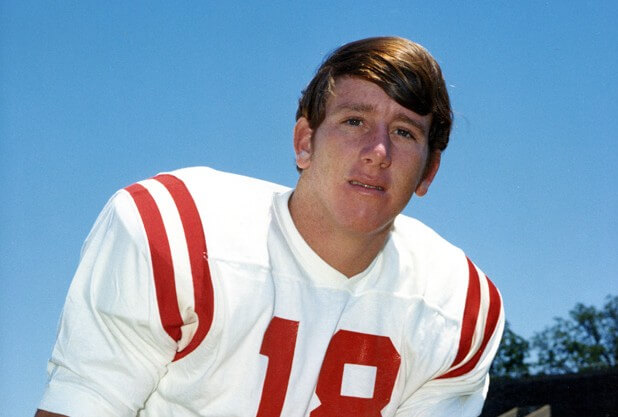 Manning attended the University of Mississippi in Oxford and was the starting quarterback at Ole Miss for three years. In the first national primetime broadcast of a college football game (1969), Manning threw for 436 yards and three touchdowns, also rushing for 104 yards, in a 33–32 loss to Alabama.

However, the rest of the team was not at his level and despite Manning’s considerable talent, the Rebels had a record of only 15–7 in his last two years. In his college career, he threw for 4,753 yards and 31 touchdowns (despite 40 interceptions) and ran for 823 yards. He scored 14 touchdowns in 1969. In both 1969 and 1970, he was named to the All-SEC team and his No. 18 jersey was retired by Ole Miss. In 1969, Manning was Mississippi Sportsman of the Year and recipient of the Nashville Banner Trophy as Most Valuable Player in the Southeastern Conference in addition to winning the Walter Camp Memorial Trophy. He was fourth in the Heisman Trophy voting in 1969 and third in 1970. Manning was inducted to the College Football Hall of Fame in 1989. Manning’s legacy is honored to this day on the campus of Ole Miss where the speed limit is eighteen miles per hour in honor of Manning’s jersey number. During his time at Ole Miss, Manning was a brother of Sigma Nu fraternity. He was named Southeastern Conference Quarterback of the Quarter Century (1950–75) by several publications.