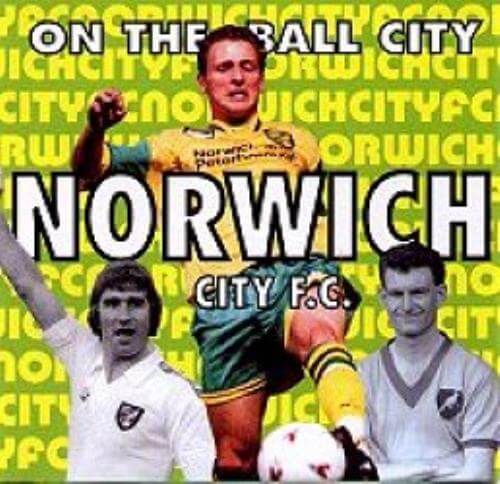 Present - On the Ball, City

The song is in fact older than the club itself having probably been penned for Norwich Teachers or Caley’s FC in the 1890s, and used by clubs such as Swifians and Norwich CEYMS before being adopted by Norwich City. The writer of the song is often attributed to Albert T Smith who became a director of Norwich City when the club was founded in 1902, and the song was adopted by fans of the club. It is sung pre-match at Carrow Road and throughout the games that Norwich City play, home and away. Although the first use of the tune and song is disputed, it had been adopted by 1902 and it remains in use today in part if not the whole.

With a few minor revisions, notably adding the word “it” into the phrases “kick-off” and “throw in”, what is currently sung is a modification of the original refrain:

Kick it off, throw it in, have a little scrimmage,

Keep it low, a splendid rush, bravo, win or die;

On the ball, City, never mind the danger,

Steady on now’s your chance,