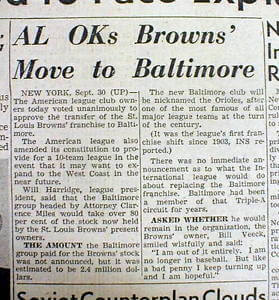 The Miles-Krieger (Gunther Brewing Company) – Hoffberger group renamed their new team the Baltimore Orioles soon after taking control of the franchise. The name has a rich history in Baltimore, having been used by a National League team in the 1890s. In 1901, Baltimore and McGraw were awarded an expansion franchise in the growing American League, naming the team the Orioles. The team was transferred to New York in 1903, becoming the New York Yankees. As a member of the high-minor league level International League, the Orioles competed at what is now known as the AAA level from 1903 to 1953. Their large postseason crowds at their temporary home, Municipal Stadium, caught the attention of the major leagues, leading to a new MLB franchise in Baltimore.