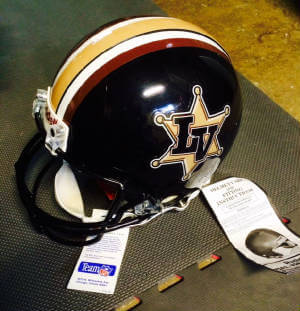 After the season, Mileti entered talks with a group from Milwaukee looking to move the Posse there. A group led by singer and business mogul Jimmy Buffett attempted to buy and relocate the franchise to Jackson, Mississippi. Buffett had gone so far as to begin assembling a front office (led by general manager Eric Tillman) and coaching staff (led by John Payne), and the CFL included the Jackson team in its 1995 draft schedule. Buffett’s first managing partner, William L. Collins, had a sale contract written up before the Posse’s board of directors unexpectedly raised the price of the team, prompting Collins to drop his bid. The CFL considered revoking the franchise and awarding a new expansion team to Collins, only to be threatened with a lawsuit from the Las Vegas board of directors. Another investor for Jackson, Norton Herrick, offered an even higher price than Collins but backed out when he could not secure the money to fund the team through its expected losses. As it was, the league, then seeking a U.S. television contract, was uncomfortable placing one of its franchises in one of the smallest and poorest media markets in America.

The league then voted to suspend the Posse’s franchise and give the team until December 1995 to sell the team. A dispersal draft was held for its players in 1995. Defensive end Derrell Robertson, who had been killed in a December 1994 car accident, was included; the league was unaware of Robertson’s death and included him in the pool of potential draftees, and the Ottawa Rough Riders selected him. Only after attempting—and failing—to find Robertson did the Rough Riders (and the league) realize that Robertson was dead. According to Riders coach Jim Gilstrap in a June 1995 Sports Illustrated article, “the league didn’t know he was dead until we told them, and we didn’t know until we couldn’t find him.”