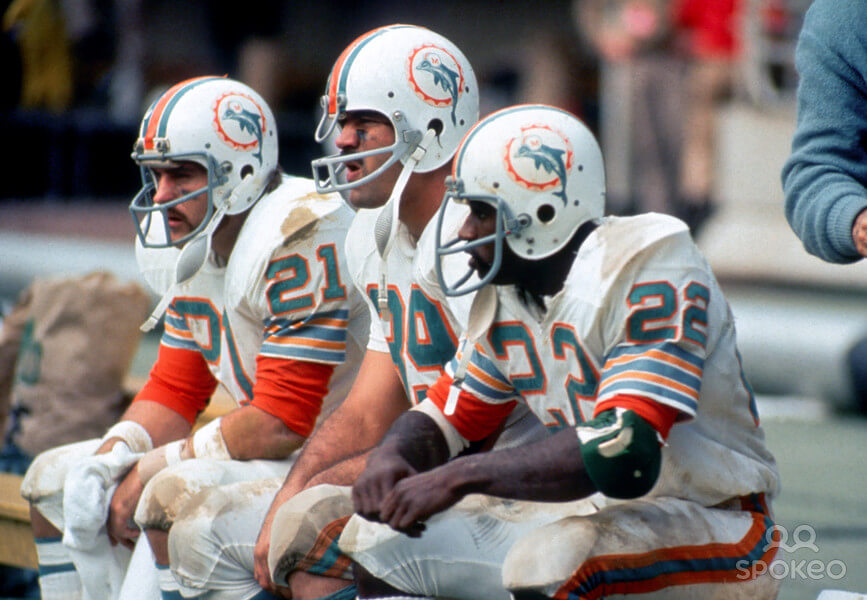 In 1972 the Dolphins completed the only fully undefeated season in the NFL, winning all 14 regular-season games, two playoff games, and Super Bowl VII, defeating the Washington Redskins 14-7. They finished the season 17-0, and are immortalized as the only team to complete an undefeated season and win the NFL title. QB Bob Greise was victim to a broken leg and dislocated ankle in Week 5 versus the San Diego Chargers and was replaced by veteran Earl Morrall for the rest of the regular season, but returned to the field as a substitute during the AFC Championship game versus the Pittsburgh Steelers and then started in Super Bowl VII. The Dolphins set the NFL single-season rushing record, and running backs Csonka and Mercury Morris became the first teammates to each rush for 1,000 yards in a season. The offensive line included future Hall of Fame members Jim Langer and Larry Little and Pro Bowler Bob Kuechenberg. The 1972 Dolphins defensive unit, called the No-Name Defense because Miami’s impressive offense received much more publicity, was the league’s best that year. It was led by linebacker Nick Buoniconti, end Bill Stanfill, tackle Manny Fernandez, and safeties Dick Anderson and Jake Scott. They secured the team rushing record by averaging more than 200 yards per game on the ground for an entire season, while the defense allowed only 171 points.