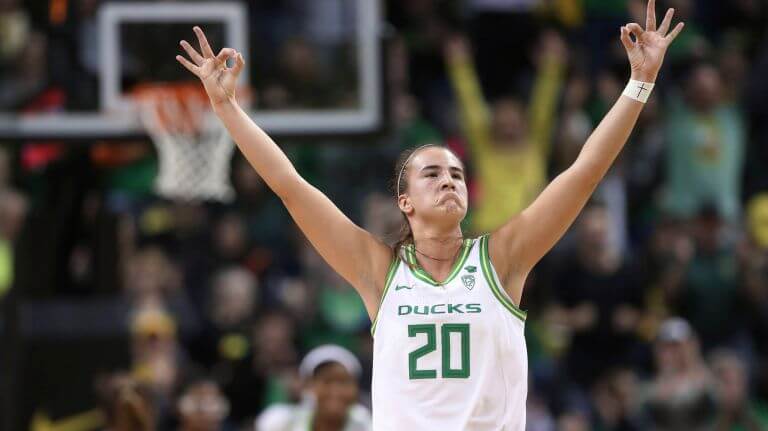 In the second game of her senior season on November 13, 2019, Ionescu surpassed the 2,000 points, 800 assists mark for her college career with a 109–52 win over Utah State. She fell short of another triple-double with 16 points, 12 assists, and 9 rebounds in the game but recorded her 2,012 career points and 810 career assists. In a win over then #3 Stanford (87–55), Ionescu scored a career-high 37 points along with 11 rebounds and 7 assists and broke Alison Lang’s Oregon all-time career scoring record of 2,252 points in the third quarter. In the rivalry game against Oregon State on January 24, 2020, Ionescu had 24 points, 9 assists, and 4 rebounds and broke Oregon State and NBA star Gary Payton’s Pac-12 all-time record of 938 assists. Payton personally congratulated Ionescu on the achievement. On February 14, 2020, Ionescu recorded her 1,000th career assist in a game against #7 UCLA and joined Courtney Vandersloot as the only player in NCAA men’s and women’s basketball history with 2,000 plus points and 1,000 plus assists. Ten days later in the Ducks’ 74–66 win at #4 Stanford, she became the first NCAA player ever with 2,000 points, 1,000 assists, and 1,000 rebounds in a career. Ionescu also recorded her eighth triple-double of the season, tying her own NCAA single-season record from last season. Earlier that day, she had been a featured speaker at the memorial service for Kobe Bryant, who had become a close personal friend within the previous two years, flying from Los Angeles to the Bay Area immediately after her speech.

On April 14, 2020, Ionescu was named the winner of the Honda Sports Award as the best collegiate female basketball player in the nation.