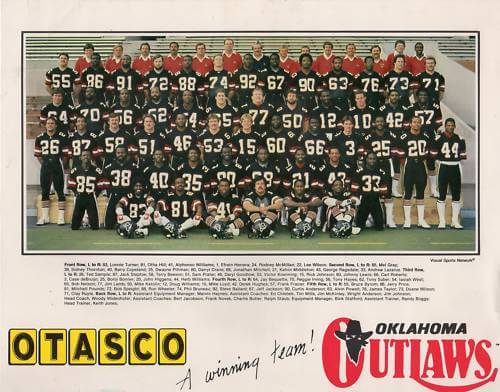 The Outlaws were originally slated to play in San Diego. However, under pressure from baseball’s Padres, the NFL’s Chargers, and the NASL’s Sockers, the city refused to grant Tatham a lease for Jack Murphy Stadium. Scrambling for a home, Tatham seriously considered playing in Honolulu for its inaugural 1984 season. However, he settled on Tulsa, Oklahoma—even though the city had not even been included in a list of possible expansion sites for the USFL.

Tatham was initially skeptical about basing a team in Tulsa. It was only the 60th-largest television market, which would have made it by far the smallest market in the league. Moreover, the only viable facility, the University of Tulsa’s Skelly Stadium, needed major renovations in order to bring it to something approaching professional standards.

However, Tatham had roots in Oklahoma and eventually concluded that putting his team there would give something back to the state. He christened his team the Oklahoma Outlaws. The club was the second major-league sports team to play in the state, after the North American Soccer League’s Tulsa Roughnecks.