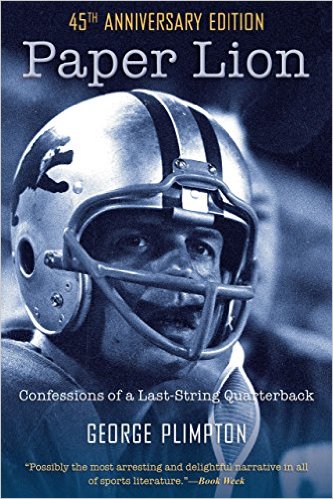 In the mid-1960s, the Lions served as the backdrop for the sports literature of George Plimpton, who spent time in the Lions training camp masquerading as a player. This was the basic material for his book Paper Lion, later made into a movie. In 1963, Plimpton attended preseason training with the Detroit Lions of the National Football League as a backup quarterback and ran a few plays in an intrasquad scrimmage. These events were recalled in his best-known book Paper Lion, which was later adapted into a feature film starring Alan Alda, released in 1968. Plimpton revisited pro football in 1971, this time joining the Baltimore Colts and seeing action in an exhibition game against his previous team, the Lions. These experiences served as the basis of another football book, Mad Ducks and Bears, although much of the book dealt with the off-field escapades of football friends such as Alex Karras and Bobby Layne. Another sportsbook, Open Net, saw him train as an ice hockey goalie with the Boston Bruins, even playing the part of a National Hockey League preseason game.