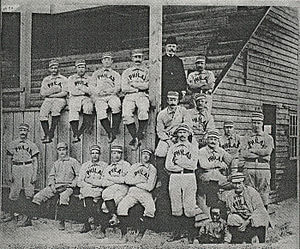 In 1884, Harry Wright, the former manager of baseball’s first openly professional team, the Cincinnati Red Stockings, was recruited as a manager in hopes of reversing the team’s fortunes. Also in 1884, the team changed its name to the “Philadelphias”, as it was common for baseball teams in that era to be named after their cities, for instance, the “Boston’s” and “New York’s”. However, as “Philadelphias” was somewhat hard to fit in newspaper headlines, some writers still continued to call them the “Quakers” while others began shortening the name to “Phillies.” At some point in the 1880s, the team accepted the shorter nickname “Phillies” as an official nickname. “Quakers” continued to be used interchangeably with “Phillies” until 1890, when the team officially became known as the “Phillies.” This name is the longest continually used nickname in professional sports by a team in the same city.