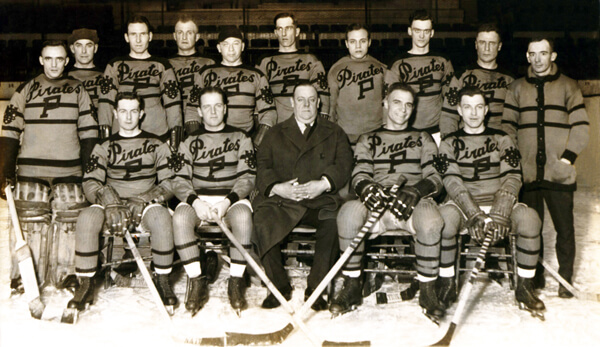 Pittsburgh was granted a franchise by the National Hockey League on November 7, 1925. The move came after Eddie Livingstone, the former owner of the Toronto Shamrocks and the Toronto Blueshirts of the National Hockey Association saw Pittsburgh as a possible member for a proposed rival league to the NHL; Pittsburgh had, in the 1890s, been the first metropolitan area to professionalize the game of ice hockey. In order to thwart the new league, the President of the NHL, Frank Calder, negotiated to put a franchise in Pittsburgh, which becomes the seventh team to join the NHL as well as the league’s third US-based team. Callahan then renamed his team the Pittsburgh Pirates, after he received permission from Barney Dreyfuss, the owner of the Pittsburgh Pirates baseball team.

The Pirates were assigned to what would later be called the NHL’s American Division, with the Boston Bruins and the New York Americans. These two franchises were the only other American teams in the NHL at the time. The Duquesne Gardens, located in the city’s Oakland neighborhood, served as the team’s home arena. The Pirates dubbed the “Mighty Steel City Sextet” in the Pittsburgh Press, were mostly leftovers from the former Pittsburgh Yellow Jackets. Ten former Yellow Jacket players would play for the Pirates.