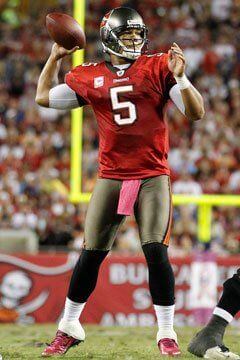 For the 1997 season, the Buccaneers worked with the NFL to develop a more marketable and intimidating look in order to improve the team’s image. The Buccaneers changed their team colors to red, pewter, black, and orange. “Bucco Bruce” was replaced by a red flag displaying a white pirate skull and crossed sabers which are a modified Jolly Roger (similar to that of Calico Jack). The flag was mounted on another sabre. The “Buccaneers” team name was written in a new font, Totally Gothic, and was either red with shadows of pewter or red and white. Orange pinstriping, and an orange football, was used to maintain a visual link to the former colors. Chris Berman nicknamed them “the pirates in pewter pants,” a play on the Gilbert and Sullivan opera The Pirates of Penzance. The Buccaneers planned to stage a ceremony in which Bruce was to walk the plank of a pirate ship in Tampa Bay, but he was pardoned at the last minute by Governor Lawton Chiles.