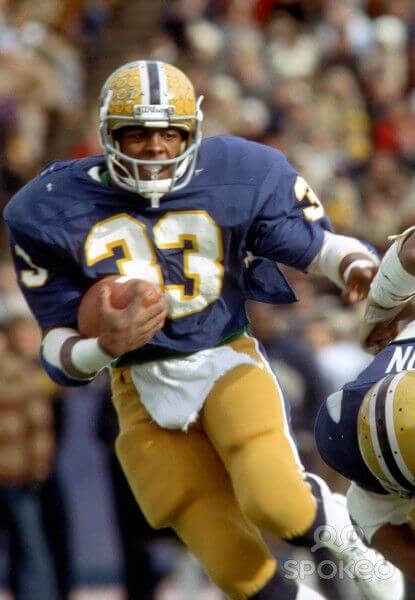 On November 6, the second-ranked Panthers hosted Army at Pitt Stadium and won handily, but the significant action was taking place several hundred miles west, in West Lafayette, Indiana, where the Purdue Boilermakers held off the top-ranked Michigan Wolverines 16–14 in the closing seconds. The Pitt Stadium crowd erupted in celebration when the stadium public address announcer dramatically gave the final score from Purdue. For the first time in the modern era, Panther fans could legitimately claim, “We’re number one!” Pitt defended its ranking in a close Backyard Brawl against West Virginia to go 10–0 heading into the regular-season finale on national television against in-state rival Penn State (7–3).

At a packed Three Rivers Stadium on the night after Thanksgiving, the Nittany Lions scored first and held Dorsett to 51 yards in the first half; the game was tied at seven at halftime. Majors adjusted for the second half by shifting Dorsett from tailback to fullback, enabling him to explode for an additional 173 yards as Pitt rolled to a 24–7 victory to cap an undefeated regular season.

In December, Dorsett became the first (and remains the only), Pitt Panther, to win the Heisman Trophy as the nation’s best college football player. Dorsett also won the Maxwell Award, the Walter Camp Player of the Year Award, and was named UPI Player of the Year. He led the nation in rushing with 1,948 yards and was selected as an All-American. Dorsett finished his college career with 6,082 total rushing yards, then an NCAA record for career rushing.

The 11–0 Panthers accepted an invitation to the Sugar Bowl to face fifth-ranked Georgia. Pitt defeated the Bulldogs 27–3 and was voted number one by both the Associated Press and Coaches polls, claiming their ninth national championship. This was Pitt’s first undefeated national championship since 1937. The American Football Coaches Association (AFCA) named Majors the 1976 Coach of the Year. Following this historic season, Majors returned to his alma mater, the University of Tennessee, to take the head coaching job.