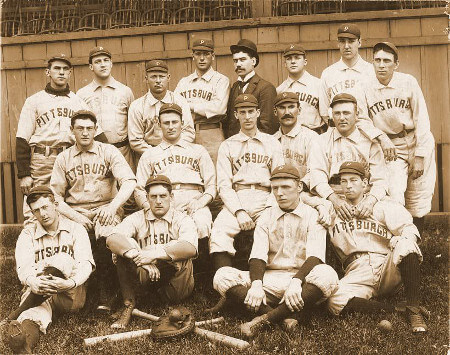 The new owners also signed up several players from American Association teams. One of them was highly regarded second baseman Lou Bierbauer, who had previously played with the A.A.’s Philadelphia Athletics. The Athletics failed to include him on their reserve list, and the Alleghenys picked him up. This led to loud protests by the Athletics, and in an official complaint, an AA official claimed the Alleghenys’ actions were “piratical.” Similarly, the Philadelphia papers complained that the deal was “an act of piracy on the high seas”. This incident which is discussed at some length in The Beer and Whisky League, by David Nemec, 1994 quickly accelerated into a schism between the leagues that contributed to the demise of the A.A. Although the Alleghenys were never found guilty of wrongdoing, they made sport of being denounced for being “piratical” by renaming themselves “the Pirates” for the 1891 season. The nickname was first acknowledged on the team’s uniforms in 1912.