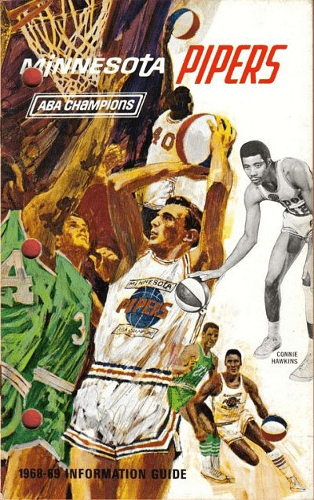 Despite the championship and strong attendance figures in Pittsburgh, the Pipers franchise left Pittsburgh after their 1968 ABA Championship and moved to Minnesota in 1968, becoming the Minnesota Pipers. Minnesota was left vacant when the Minnesota Muskies had trouble drawing people in the league’s first season and moved to Miami to become the Miami Floridians. The ABA league office was based in Minneapolis (home of league commissioner George Mikan), so the Pipers moved when a Minneapolis attorney named Bill Erickson bought a majority share of the team. As with the Muskies, their home arena was Bloomington’s Met Center. Despite making the playoffs (but losing in the first round to, coincidentally, the Miami Floridians), the Pipers’ attendance settings fared no better than the Muskies and they moved back to Pittsburgh after only one season. In Terry Pluto’s book on the ABA, Loose Balls, Pipers co-owner Gabe Rubin says he returned to the Steel City because he couldn’t think of anywhere else to go.