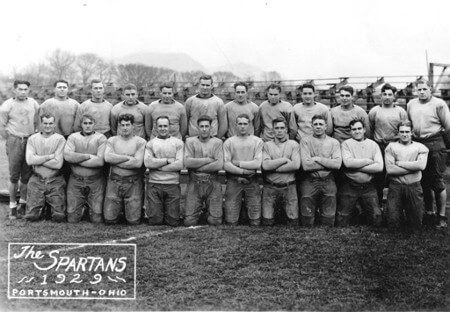 The Spartans were initially formed in 1929 in Portsmouth, Ohio, drawing players from defunct independent professional and semi-pro teams in the Ohio, Kentucky, West Virginia tri-state area. They immediately made an impact by twice defeating the Ironton Tanks, a nearby independent professional team who had regularly played NFL member teams since the early 1920s with considerable success. Portsmouth residents agreed to fund the construction of Universal Stadium, a venue comparable to those in neighboring communities along the Ohio River, prompting the NFL to offer league membership in 1930. Portsmouth became the NFL’s second-smallest city, ahead of only Green Bay. During the team’s first year in the league, it compiled a record of 5–6–3 in league contests.