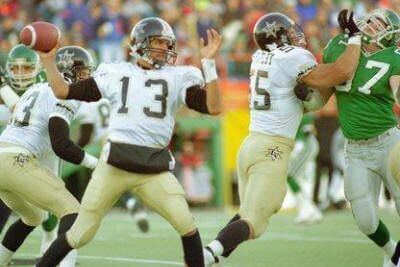 When the Posse started the 1994 season it was clear that CFL football would not last in Las Vegas. They were owned by a publicly held corporation whose public face was Cleveland, Ohio-based Nick Mileti (whose other sports holdings included the NBA’s Cleveland Cavaliers and the AHL’s Cleveland Barons), a man who took little direct involvement in team operations.

The team played at Sam Boyd Stadium in suburban Whitney. As was the problem at many of the other playing fields of the American CFL teams, the end zones at the stadium were only 15 yards long, instead of the usual 20 yards needed for the Canadian game. In addition, the stadium was uncovered and offered no protection from the infamous Las Vegas summer heat. Head coach Ron Meyer was seen at many practices running drills with no shirt on in the sweltering heat.

The Posse practiced on a smaller-than-regulation field (only 70 yards long) at the Riviera Casino and Resort, where a sign read “Field of ImPOSSEable Dreams.” With no marketing assistance from the league and a glut of other entertainment options, local interest was virtually nonexistent.