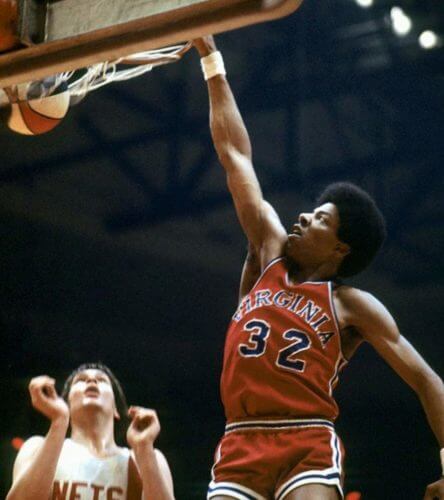 Merger talks with the NBA were already underway, but a major stumbling block was the presence of the Caps in Washington. Baltimore Bullets owner Abe Pollin wanted to move his team to Washington but did not want the Caps there. The other ABA owners persuaded Foreman to move the Caps for the second time in as many seasons. Foreman decided to make the Caps a regional franchise, the Virginia Squires. The team would be based in Norfolk and played most of their games at the Norfolk Scope and the Old Dominion University Fieldhouse. They also played home games in Hampton at the Hampton Roads Coliseum, in Richmond at the Richmond Coliseum, and in Roanoke at the Roanoke Civic Center. However, Roanoke was dropped from the list of “home” cities after only one season. The Squires’ colors were red, white, and blue.