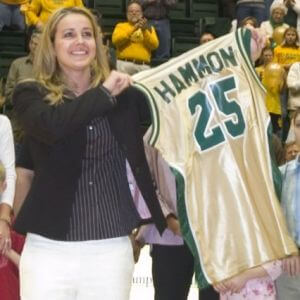 Hammon’s prolific scoring for the Colorado State Rams made her an All-American three times, as well as Colorado Sportswoman of the Year. She led her team to a 33–3 record in the 1998–99 season and helped them advance to the NCAA Tournament’s Sweet Sixteen. She was named the WAC Mountain Division player of the year for the 1998–99 season and surpassed the University of Utah player Keith Van Horn as the WAC’s all-time leading scorer.

On November 12, 2004, Hammon was inducted into the Colorado State University Sports Hall of Fame. On January 22, 2005, her number 25 Colorado State jersey was retired at Moby Arena.