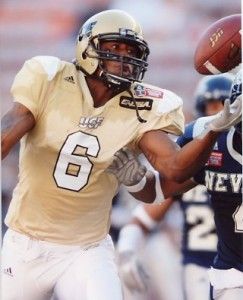 Marshall attended the University of Central Florida, where he played a total of 44 games (21 starts) at wide receiver for the UCF Knights football team. He collected 112 receptions, 1,674 receiving yards, and 13 touchdowns in his collegiate career. As a freshman, he had a limited role and had two receptions for 18 yards and a touchdown. As a sophomore, he had 27 receptions for 363 yards and two touchdowns. As a junior, he had eight receptions for 84 yards and had an interception on defense. His best season came in 2005 as a senior. He played in 13 games and had career highs in receptions (74), receiving yards (1,195), and touchdowns (11). Marshall’s best career game came in the 2005 Hawaii Bowl, where he had 11 catches for 210 yards and three touchdowns. He was named MVP of the game. For his efforts during the 2005 season, Marshall was selected to the All-C-USA second team.