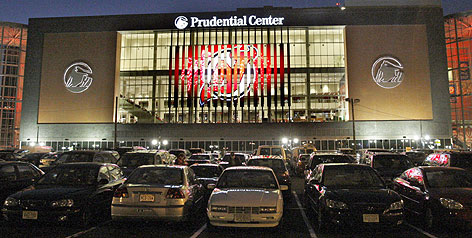 The Devils opened their new arena, the Prudential Center, on October 27, 2007, against the Ottawa Senators, after opening the season with a nine-game road trip. The game ended with a 4–1 win for Ottawa. Prudential Center (nicknamed The Rock) is a multi-purpose indoor arena in the central business district of Newark, New Jersey, United States. The arena was designed by HOK Sport (now Populous), with the exterior designed by Morris Adjmi Architects. Opened in 2007, it is the home of the National Hockey League’s (NHL) New Jersey Devils and the NCAA’s Seton Hall Pirates men’s basketball team. The arena seats 17,625 patrons for hockey and 18,711 for basketball.