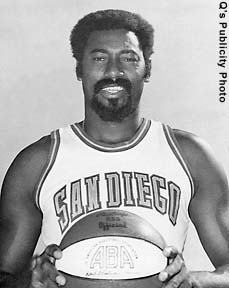 After reaching the 1973 ABA Playoffs in their inaugural season, the Q’s seemingly pulled off a coup by paying center Wilt Chamberlain $600,000 to become their player-coach. But the Los Angeles Lakers sued to block their former star from playing for his new team. Relegated to a sideline role, Chamberlain was reduced to an indifferent, 7-foot-1-inch sideshow who once skipped a game in favor of an autograph session for his recently published autobiography. (His fill-in, on that and other occasions, was Stan Albeck, who later skippered the Chicago Bulls, San Antonio Spurs, and New Jersey Nets of the NBA.) Nonetheless, the team again reached the postseason, bowing out in the first round, for the second year in a row, in the 1974 ABA Playoffs.