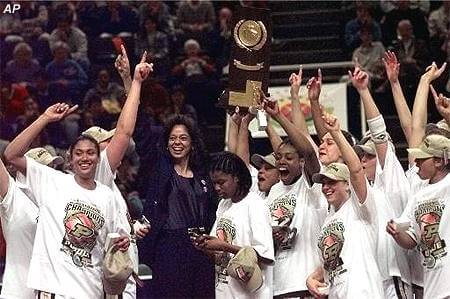 The 1999 NCAA Division I Women’s Basketball Tournament began on March 12, 1999, and concluded on March 28, 1999, when Purdue won its first national championship in any women’s sport. The Final Four was held at the San Jose Arena in San Jose, California, on March 26–28, 1999. Purdue defeated Duke 62-45 in Carolyn Peck’s final game as head coach for the Boilermakers. She had previously announced her intention of leaving Purdue after two seasons to coach the expansion WNBA Orlando Miracle.

The two finalists had recent “off the court” history. Duke’s coach, Gail Goestenkors, was a former assistant coach at Purdue under Lin Dunn until becoming the Blue Devils’ head coach in 1992. Dunn’s firing from Purdue in 1996 and the subsequent player defections resulted in the unusual scenario that two Blue Devil players in the championship game had formerly transferred from Purdue. Purdue’s Ukari Figgs was named Most Outstanding Player.