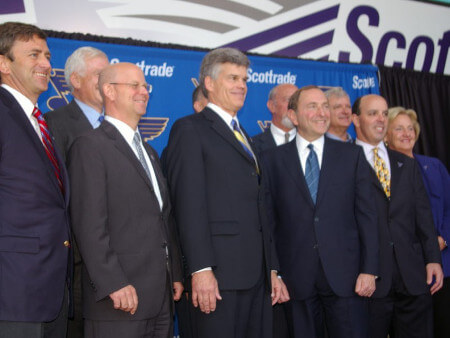 In the meantime, the franchise was on the brink of financial collapse. This was partly due to the pressures of the World Hockey Association, but mostly the result of financial decisions made when the Salomons first acquired the franchise. Deferred contracts came due just as the Blues’ performance began to slip. At one point, the Salomons cut the team’s staff down to three employees. One of them was Emile Francis, who served as team president, general manager, and coach.

The Salomons finally found a buyer in St. Louis-based pet food giant Ralston Purina in 1977, who renamed the Arena “the Checkerdome.” Francis and minority owner Wolfson helped put together the deal with Ralston Purina, which ensured that the Blues would stay in St. Louis. Only a year after finishing with only 18 wins still the worst season in franchise history, the Blues made the playoffs in 1980, the first of 25 consecutive post-season appearances. The team’s improvement continued into 1981, when the Berenson-coached team, led by Wayne Babych (54 goals), future Hall of Famer Bernie Federko (104 points), Brian Sutter (35 goals), and goaltender Mike Liut, second to Wayne Gretzky for the Hart Trophy, finished with 45 wins and 107 points, the second-best record in the league. Their regular-season success, however, did not transfer into the playoffs, as they were eliminated by the New York Rangers in the second round. The Blues followed their generally successful 1980 – 1981 campaign with two consecutive sub-.500 seasons, though they still managed to make the playoffs each year.