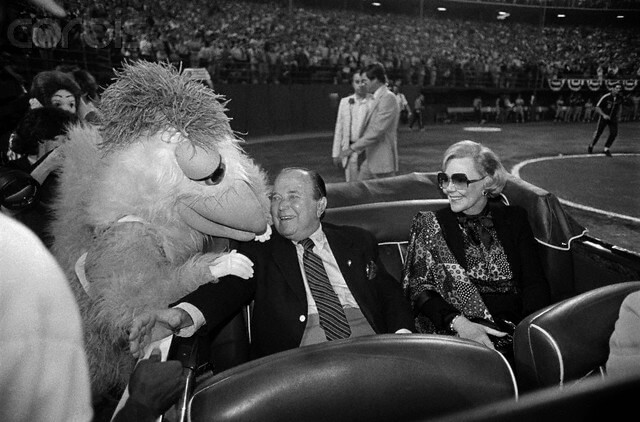 In 1974, Kroc decided to retire from being CEO of McDonald’s. While he was looking for new jobs, he decided to get back into baseball, his lifelong favorite sport, when he learned that the San Diego Padres were for sale. The team had been conditionally sold by founding owner C. Arnholt Smith to Washington grocery-chain owner Joseph Danzansky, who planned to move the Padres to Washington. However, the sale was tied up in lawsuits when Kroc purchased the team for $12 million, saving baseball in San Diego. In Kroc’s first year of ownership in 1974, the Padres lost 102 games, yet drew over one million in attendance, the standard of success in the major leagues during that era. Their previous top attendance was 644,772 in 1972. The San Diego Union said Kroc was “above all, a fan of his team”. On April 9, 1974, while the Padres were on the brink of losing a 9-5 decision to the Houston Astros in the season opener at San Diego Stadium, Kroc took the public address microphone in front of 39,083 fans. “I’ve never seen such stupid ballplaying in my life,” he said. The crowd of around 40,000 cheered in approval. In 1979, Kroc’s public interest in future free agent players Graig Nettles and Joe Morgan drew a $100,000 fine from Commissioner Bowie Kuhn. Frustrated with the team, he handed over operations of the team to his son-in-law, Ballard Smith. “There’s more future in hamburgers than baseball,” Kroc said.

Kroc was inducted posthumously as part of the inaugural class of the San Diego Padres Hall of Fame in 1999.