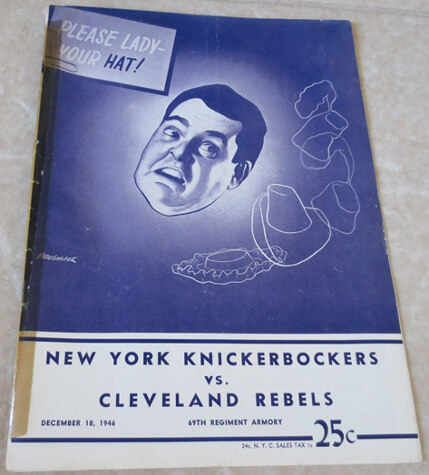 The Cleveland Rebels were among the 11 teams in the newly established Basketball Association of America. The new basketball league had a distinct advantage over two other established professional basketball leagues, in that it had the backing of major arena owners looking to fill their buildings. Playing at the Cleveland Arena, the Rebels hosted the Toronto Huskies in their first game on November 3rd. Coached by Dutch Dehnert a star in the old ABL, credited with inventing the pivot play, the Rebels would defeat the Huskies 71-60 in their first game. Big Ed Sadowski and Kenny Sailors were the Rebels most notable players Sadowski led Cleveland in scoring with 16 points per game, while Frankie Baumholtz was named to second team of the all BAA team. The Rebels would have their up and downs, as Roy Clifford took over for Dutch Dehnert as coach for the final 23 games. The Rebels would finish their first season with a record of 30-30 and qualified for the first BAA Playoffs. In the postseason the Rebels would face the New York Knickbockers in a best-of-three series. The Rebels hosting Game 1 got off to a quick start clubbing the Knicks 77-51. However, New York would win the next two games at Madison Square Garden to advance to the semifinals, while the Rebels unable to make a profit folded after one season.