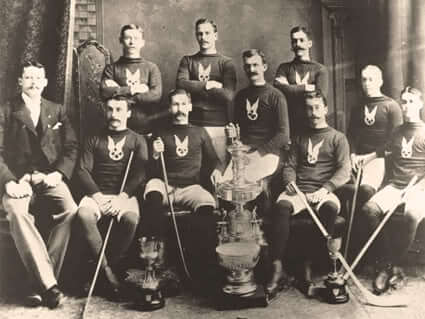 In 1932, the NHL let grain merchant James E. Norris, who had made two previous unsuccessful bids to buy an NHL team, purchase the Falcons. Norris’ first act was to choose a new name for the team the Red Wings. Earlier in the century, Norris had been a member of the Montreal Amateur Athletic Association, a sporting club with cycling roots. The MAAA’s teams were known by their club emblem and these Winged Wheelers were the first winners of the Stanley Cup in 1893. Norris decided that a version of their logo was perfect for a team playing in the Motor City and on October 5, 1932 the club was renamed the Red Wings. Norris also placed coach Jack Adams on a one-year probation for the 1932 – 1933 NHL season. Adams managed to pass his probationary period by leading the renamed franchise to first ever playoff series victory over the Montreal Maroons. Despite this success, the team lost in the semi-finals to the New York Rangers.