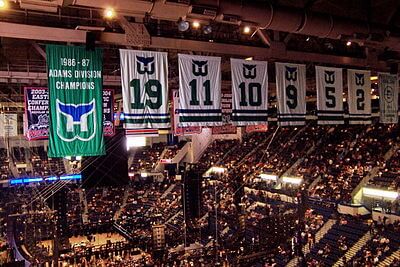 While in Boston, the club played their home games at the Boston Arena and Boston Garden. However game scheduling at Boston Garden owned by the rival NHL Bruins became increasingly difficult, and the owners decided to relocate the team to Hartford, Connecticut beginning with the 1974 – 1975 season. The area, aside from various minor league teams in New Haven, had been largely bereft of pro hockey until the team’s arrival. While waiting for their new arena in Hartford, the Whalers played the first part of the 1974 – 1975 season at The Big E Coliseum in West Springfield, MA.

On January 11, 1975, the team played its first game in front of a sellout crowd at the Hartford Civic Center Coliseum. The franchise remained in Hartford until it relocated to North Carolina for the 1997 – 1998 season, save for a temporary relocation to the nearby Springfield Civic Center in the late 1970s while their Hartford arena was being rebuilt after heavy snow followed by heavy rain caused the roof to collapse, which suffered from several engineering and construction shortcomings.