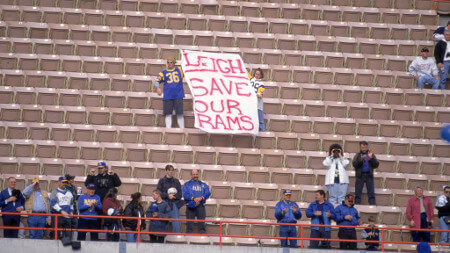 Georgia Frontiere attempted to relocate the Rams to Baltimore, Maryland, but that deal was eventually stopped. Mrs. Frontiere then sought to relocate the team to the city of St. Louis. NFL owners (of the Buffalo Bills, New York Jets, Giants, Washington Redskins, Arizona Cardinals, and the Minnesota Vikings, specifically) voted to oppose the move, arguing that Frontiere who was claiming that, without the extra revenues from a new stadium, the L.A. market was so unprofitable that it risked bankrupting the Rams had badly mismanaged the team. Nevertheless, she threatened to sue the NFL itself; ultimately, Commissioner Paul Tagliabue acquiesced to Frontiere’s demands. As part of the relocation deal, the city of St. Louis agreed to build a taxpayer-financed stadium and guaranteed that the stadium’s amenities would be maintained in the top 25% of all stadiums in the National Football League. Frontiere waived the clause after a 10-year threshold period had passed, though, as the city implemented a later plan to improve the stadium.