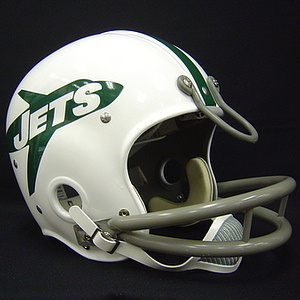 Werblin also announced a new name for his team, the Jets, which had been selected from among 500 candidates submitted by “friends, enemies, and advertising agencies”. The name was chosen over Dodgers, Borros, and Gothams. The team’s colors were changed to green and white. In a press release, the team stated the reason for the selections:

The site of the new stadium between New York’s two major airports, symbols of this speedy, modern age, influenced the selection of the new name “Jets”. It reflects the spirit of these times and the eagerness of all concerned—players, coach, and owners—to give New York another worthy team. The new team’s colors of green and white were chosen for much the same reasons, plus the fact that down through the ages green has always signified hope, freshness, and high spirits.