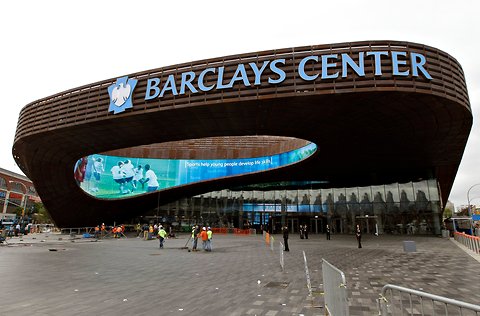 The new arena, later named Barclays Center, would be the center of an extensive redevelopment project called the Atlantic Yards being constructed by Ratner’s real estate development company. The new arena is located across the street from the site that Walter O’Malley wanted to use for a new stadium for the Brooklyn Dodgers in the early 1950s. That plan was rejected and resulted in the team’s relocation to Los Angeles in 1958. The Nets would not only return to New York for the first time since 1977 but also became the first major professional sports team to play home games in Brooklyn since the departure of the Dodgers.

After the dismissal of major pending lawsuits, groundbreaking for Barclays Center occurred on March 11, 2010. On September 26, 2011, Jay-Z, the Nets’ minority owner, announced that the team’s new name after the move to Brooklyn would be the Brooklyn Nets. The team officially became the Brooklyn Nets on April 30, 2012. The team’s new colors were announced to be black and white, and two official logos designed by Timothy Morris were unveiled. The primary logo is a shield depicting the team name ‘Nets’, along with a basketball with an overlaid “B”. The secondary logo is the same “B-ball” surrounded by a black circle with the text “Brooklyn” and “New York”. The new logo’s typeface and colors are meant to evoke New York City Subway roll signs from the 1950s when Brooklyn last had a major league sports team. This rebranding of the team led to a dramatic increase in merchandise sales for the team. On the first two days that the new merchandise was available, total sales from the NBA Store were 10 times that of a typical year when the team was in New Jersey, and in the initial months of the 2012–13 NBA season, the Nets led all NBA teams in apparel sales.