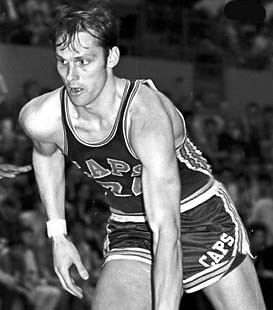 Angered by management’s failure to pay him certain incentive bonuses he felt were due him, Rick Barry sat out the 1967 – 1968 season and signed with the Oakland Oaks of the rival American Basketball Association for the following year, but after four seasons in the ABA rejoined the Warriors in 1972. During Barry’s absence, the Warriors were no longer title contenders, and the mantle of leadership fell to Thurmond, Jeff Mullins and Rudy LaRusso. They began scheduling more home games in Oakland with the opening of the Oakland Coliseum Arena in 1966 and the 1970 – 1971 season would be the team’s last as the San Francisco Warriors.